Thank you to everyone who has read and commented on my post about reading queer work with students.

I chose to read the essay, “Origin of Dress” by Christina Quintana, published in Nimrod International Journal 59.2 Spring/Summer 2016 (please check out my literary magazine review of Nimrod for New Pages).

The essay was well received! Students who came to meet with me the week before saying nonfiction was boring, found Quintana’s essay not only engaging but relatable. I used this piece as an introduction to creative nonfiction and asked students to write some creative nonfiction of their own. Most students brought detailed understandings of themselves living in a gendered world.

When we put the piece away, one student asked, “So, will we read more stories like this?” She meant more nonfiction.

And while I was concerned to read work by queer authors and work featuring queer content and protagonists, I knew this was the right thing to do. Not only had some students expressed an interest in reading and learning about LGBTQ issues, but I also knew any fear I had was my own internalized homophobia. I didn’t want to read queer work for fear I was pushing the gay agenda, or flaunting my queer identity.

Students’ comfortability with queer content varied, but no one shut down or was visibly distressed. In some meetings the author’s sexuality never came up at all. In others, the student was the one to name Quintana’s sexuality as part of their discussion of the narrative.

What helped me the most in making the decision to read queer work with students, was putting this in perspective. If I had been an educator fifty years ago, I wouldn’t want to look back on my work and know that I avoided texts by people of color because I didn’t want to offend students or parents. I do not mean to make a comparison between the fight for racial equality and the fight for equality across sexualities and genders, but the same principle applies for this situation. To create an exclusive learning environment that only speaks to what is acceptable and won’t rock the boat is morally wrong. I would not be comfortable teaching a majority white-washed cis male heterosexual curriculum. Even if I my choice to read Quintana’s work had caused offense (and as far as I know it hasn’t) I still believe I made the right choice to read queer work with my students.

In the upcoming weeks, I might still read “Psalm in the Spirit of Amnesia” with a few students who are strong readers. I will keep everyone updated.

Thank you again for your support, encouragement and advice!

This past weekend I was at the 2015 Hunger Walk benefiting the Atlanta Community Food Bank. I’m there through my internship, a non-profit that works with the Hizmet Movement (AKA the Gulen movement)–a peaceful civic interpretation of Islam that fosters understanding and dialogue between all faiths, based on the ideas of Turkish scholar Fetullah Gulen.

In such an environment I wasn’t expecting to have the conversation that I did. Before the walk begins, I was speaking with a middle aged woman who, upon learning I’m at the walk through my internship, asked: “Are you Muslim?”

I told her, “No.” I’m not Muslim. I din’t tell her I’m Jewish because I distrusted her.

She attempted to backtrack but didn’t apologize because she didn’t realize she had done something wrong. She then told me, “I know not all Muslim girls wear a headscarf.”

This is true, but it doesn’t justify her question. If she had to ask if I was Muslim it meant she would view me differently based on my answer. She needed to know to satisfy her own curiosity and prove her own goodness and accepting diversity. It’s the same way that by telling me she knew not all Muslim women wear hijabs, she was really telling me was: I’m a good liberal woman, I swear. I’d accept you even if you were Muslim.

And I’m sure she’s a good person, but she didn’t need to prove how liberal she was to me. I talked with her throughout the walk and found out she routinely does walks for Breast Cancer, that she supports gay marriage and that she’s aware of issues of race. These conversations came up naturally and we were having a discussion. I felt more at ease because she wasn’t trying to prove anything.

I’ve been having a lot of conversations with one my friends lately about the “good liberal on the street” who thinks that listening to NPR, voting for the democrats and supporting gay marriage or having a gay friend makes them radical and leftist and somehow helping the world. But if this is all a person is doing, if this is all a person sees as making a difference, and if a person is willing to stop there and congratulate themselves on their good liberal lifestyle they’re still part of the problem.

NPR is tame. Gay marriage is the tip of the iceberg.

As long as liberal people feel the need to prove how liberal they are with questions like “Are you Muslim?” then we’re stuck in an unfortunate definition of liberality. We’re stuck with liberals but not activists.  I’m not saying these “good liberals on the street” are bad people, or that being radical somehow makes someone more moral, but we need more than surface level change. We need to arrive at a day where the answer to the question “Are you Muslim?” is “Does it matter?”

It can be difficult enough being a writer, but being a queer writer who writes genre fiction makes it even more challenging. For anyone else who writes science fiction, consider submitting your material to Lightspeed Magazine’s special edition of its publication Queers Destroy Science Fiction. Read the submission guidelines, but your story doesn’t have to involve queer characters (though it most certainly can). As long as you identify as queer you’re encouraged to submit. An added bonus, Lightspeed Magazine pays 8 cents per word.

If you aren’t a science fiction writer (or a writer at all) you might be eligible to post on the tumblr page for the National Museum of American Jewish History. They are seeking to document the stories of queer Jewish Americans.

As their tumblr page says:

Do you have handbills, pins, letters, posters, t-shirts, banners, ritual objects, or other things related to the experience of LGBT Jews in America?

If the answer is yes, click here for more information.

I don’t keep up with politics and current events as often as I should. Though I’ve been aware that Russia has serious human rights issues going on with homophobia, I had no idea that it was as bad as it is. I thought I package it neatly in my mind under the vague umbrella term of human rights issues and that because I didn’t see it happening that it couldn’t be so terrible. I am incredibly naive at times and still need to check myself and my privilege far more often than I currently do.

A friend of mine posted this link on facebook from The Gaily Grind complete with videos of a Russian Neo-Nazi group torturing a teenage gay man.

Here is the video. I have not watched it yet because just reading the article made me sit down and cry and I know I do not have the stomach to watch this violence. But I also know that it is important to do so in order that we are all shocked awake from our day dreams of a progressive world where bigotry and hatred are small nuisances, existing on the frames of our conscious minds.

We have a long way to go in human rights and I feel that no matter what I say, nothing will sum up this atrocity. Especially because it is not the only case of torturing LGBTQ people and it is being treated as commonplace in Russia! The Neo-Nazis who recorded this video are not being punished or taken in by the police. Public opinion supports their monstrous behavior.

The Gaily Grind’s article posted above reports that:

A recent poll by Pew Research Center found that three out of every four Russians say society should not accept homosexuality. The percentage of those who think homosexuality should be accepted dropped 4% since 2007, from 20% to 16%.

In March, Levada Public Opinion Center reported that 85 percent of Russian adults said they were strongly against a law that would allow same-sex marriage. They also found that supporters of same-sex marriage in Russia fell from 14% to just 5% over the past three years. On the other side of the spectrum, some expressed strong opposition to homosexuality: 16 percent of those polled suggested that homosexuals should be isolated from society, 22 percent said that the treatment of homosexuality must be made compulsory, and 5 percent said that homosexuals should be ‘exterminated.’

I read this and I cried. What can be said about this? What can possibly describe the horror and hate we turn a blind eye to because we don’t want to see the great evil people are capable of? I don’t have the words! Maybe I’ll have the words someday, but right now all I can think of is how it is easy to pretend that because such hatred does not exist as blatantly in America that it does not exist. But hatred is hatred and there is no way to quantify it.

I was on the phone with my brother when I found this article. I paused in our conversation and told him that I was reading an article on how a gay teenager was tortured to death in Russia and if I was quiet for a few moments that was the reason. My brother told me that if I needed to go, then I should go. It hurt that he didn’t offer up an opinion. It hurt that he felt that if I just had a few moments to collect myself then I would be alright and that our conversation wasn’t truly muddled with death or stained with reality far beyond our mindless conversation of Pokemon games.

There are no words I know to describe this hurt I felt because hurt is too simple. I don’t have the words, but I need to share this article, this video and my story with finding out this information with anyone who will listen because someone will have the words. Someone will be able to describe why torturing someone for his or her sexual orientation is wrong and how it stems off from something as simple as gay slurs and other minor forms of hate speech. Hate is hate is hate the same way love is love is love. Even if I don’t have the words someone else will.

Yes, this is indeed a publication named after Oscar Wilde! Appropriately enough it is a queer arts and literary magazine who describe themselves as

Art and Literature with a Queer Edge.

I was so lucky to have found this journal and even luckier to have my non-fiction published in the Summer 2013 issue.  My non-fiction piece “The Worst Thing” is about coming out to my brother as asexual and finding my voice in the queer community.

Wilde Magazine is a recent publication, starting in 2012 and seeking a community for LGBTQ and allies to discuss the queer perspective and open up the realm of art for communal enjoyment.

Wilde Magazine publishes bi-annually in both print and digital copies. Hopefully I will be able to schedule an interview with a member of their staff to tell us more about their publication, what they look for in submissions and the future of the magazine.

In the mean time, both the print and digital copies of the Summer 2013 issue are available and you can buy your own copy here:  http://www.magcloud.com/browse/issue/589325 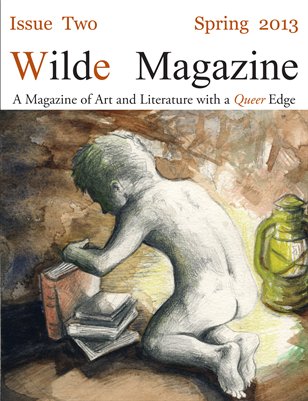